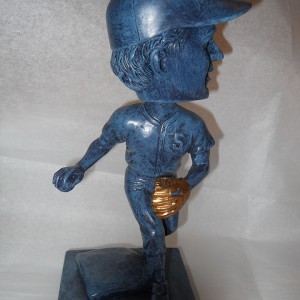 Brooks Robinson Statue Bobble Head. Have Arrived 1/6/2012. Only 2400 made. BROOKS ROBINSON STATUE UNVEILED IN BALTIMORE ON SATURDAY, OCTOBER 22 BY HENRY ROSENBERG & BABE RUTH BIRTHPLACE FOUNDATION Tribute to “Mr. Oriole” Resides on Newly Named Brooks Robinson Plaza between Washington Boulevard & Russell Street Baltimore, Md. –The Dorothy L. and Henry A. Rosenberg, Jr. Foundation and The Babe Ruth Birthplace Foundation today announced that the Brooks Robinson Statue was unveiled in downtown Baltimore on the Plaza between Washington Boulevard & Russell Street. The area was also renamed Brooks Robinson Plaza. The statue pays tribute to the Baltimore Orioles’ legend and National Baseball Hall of Famer. Following the unveiling, the statue was gifted to the City of Baltimore by Henry Rosenberg, who spearheaded the project, and the Babe Ruth Birthplace Foundation. The ceremony, which was free and open to the public, attracted a massive crowd of fans. Included among the special guests who offered their thoughts on Robinson during the ceremony were Jeff Idelson, president of the National Baseball Hall of Fame; Baltimore-native and Emmy nominated actor, Josh Charles; world renowned artist & sculptor of the Robinson statue, Joe Sheppard; and many others. Robinson himself addressed the crowd and sentiments from fellow third basemen and Hall of Famers, Mike Schmidt and Cal Ripken, were also read during the ceremony. The two were unable to attend the ceremony because of family commitments. The statue was sculpted by Baltimore-native and world renowned artist Joe Sheppard at his study in Italy. It stands roughly nine feet tall, depicting Robinson at third base preparing to throw out a runner at first base. It weighs over 1,500 pounds and is positioned on a base that is approximately 25 feet long by 25 feet wide, with a series of risers leading to the four-and–a half foot tall pedestal. Both the risers and pedestal feature text about Robinson’s career, and the glove is made of gold in honor of his 16 Gold Glove Awards. “Brooks is more than just a baseball player, he’s an iconic figure who is a tremendous ambassador for the City of Baltimore,” stated Rosenberg. “While Brooks was a phenomenal ballplayer, he’s an even greater human being. Just look at the crowd that came out today for this unveiling…that says it all about how loved Brooks is. From player to broadcaster, philanthropist to local resident, Brooks has been a pillar of this community for generations and we wanted to give fans and people in general this opportunity to say ‘thank you’ by erecting this statue in his honor.” Robinson established a standard of excellence for modern-day third basemen. He played 23 seasons for the Orioles, setting Major League career records for games, putouts, assists, chances, double plays and fielding percentage. A clutch hitter, Robinson totaled 268 career home runs, at one time an American League record for third basemen. He earned the league’s MVP Award in 1964 and the World Series MVP in 1970, when he hit .429 and made a collection of defensive gems. Robinson was inducted into the National Baseball Hall of Fame in 1983 after receiving 344 votes of 374 ballots cast (91.98%). Highly regarded for his defensive ability, he was named as the third baseman for the Rawlings 50th Anniversary All-Time Gold Glove Team. Added Mike Gibbons, executive director of the Babe Ruth Birthplace Foundation, “Brooks Robinson defined the third base position in baseball and we are honored to help preserve his standing among the greats in our state’s sports heritage. It’s fitting that this statue is positioned in an area that enables Brooks to welcome people as they arrive in Baltimore by way of such a main road in Russell Street. The outpouring of support today was a testament to the character of Brooks and how much he is revered.” Sponsors of the Brooks Robinson statue include: Batza Family Foundation; Stephen A. Geppi; Willard Hackerman; John A. Luekemeyer, Jr.; Leroy Merritt; Opening Day Partners; Cal Ripken Sr. Foundation; Leonard J. Attman, Gary L. Attman; Ollie’s Bargin Outlet; Mark & Betty Butler; Stephen G. Peroutka; St. John Properties; Mark & Lorraine Schapiro; and a special thanks to Under Armour.