As one of the oldest and most complete surviving metropolitan railroad station buildings in the country, Camden Station is a true symbol of Baltimore as the “birthplace” of American railroading. The station’s history covers nearly 150 years. It served as headquarters of the Baltimore and Ohio Railroad, ferried telegraph messages of Civil War movements, and hosted at least three visits by President Abraham Lincoln, including a brief period following his assassination when his body lay in state. Construction of the central portion of Camden Station, with its 185-foot tower, started in 1856 and took a year to complete. The ground floor contained railroad and telegraph offices and was the center of the early transportation activity in Baltimore . The first expansion of the facility brought the addition of the ladies and gentlemen’s waiting rooms. These grand spaces featured 18- to 20-foot ceilings, wooden wainscoting, plaster moldings, and fireplaces. Sports Legends Museum at Camden Yards has restored the Gentlemen’s Waiting Room to its original luster. Visitors to the museum can learn about Camden Station’s important role in the first blood of the Civil War during the Pratt Street riots as well as Abraham Lincoln’s connection to the building. Artifacts in the Gentlemen’s Waiting Room include rare artifacts from the Pratt Street Riots, personal items from a Confederate prisoner who passed through the station as well as historic photographs and maps. 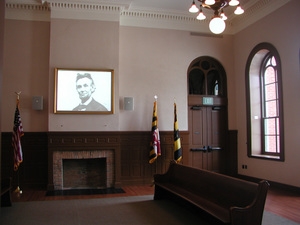