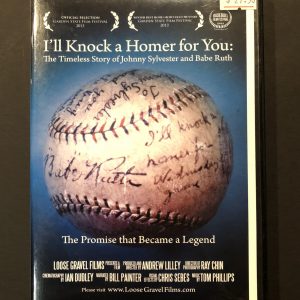 I’ll Knock a Homer for You: The Timeless Story of Johnny Sylvester and Babe Ruth

“During the World Series of 1926, one of the most enduring baseball legends occurred that has been shrouded in mystique for almost a century.  Babe Ruth, at the height of his popularity, promised to hit a home run during Game 4 for an ailing boy in new Jersey named Johnny Sylvester.  Johnny was my great-uncle, and my documentary is the first one ever made on this special story.  Through rare interviews with Johnny himself and people familiar with the events, this film will shed light on the promise that became a legend.”