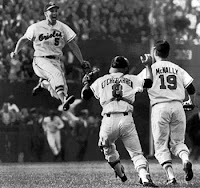 This week a fair amount of attention has been focused on the Brooks Robinson statue, which is scheduled to be unveiled on October 22nd in the plaza between Russell Street and Washington Boulevard, just northwest of Oriole Park.

The project is the brainchild of local businessman Henry Rosenberg, who for more than three decades employed Brooks at Crown Central Petroleum. Henry, as well as anyone, knows how important number five has been to our community, both on and off the playing field. For as ‘other-worldly’ as Brooks’ ability was around the hot-corner, where he thrilled and dazzled us for two decades, he proved equally adept in his role as model citizen.

Since their inaugural American League season in 1954, the Orioles have sported any number of superlative athletes, but none understood nor grasped their role as an integral part of the soul of the community better than Brooks.

And because of that, he is universally regarded as Mister Oriole, and why he and Johnny Unitas remain the face of Baltimore sports. Back in the fifties, when Baltimore was generally perceived as nothing more than a rest stop between Washington and Philadelphia, it was Johnny U’s Baltimore Colts and then Brooksie’s Birds of Baltimore,  Hon, who gave us something to be proud of: world champion football and baseball teams.

Their mild-mannered but prolific athletic swagger landed them not only in their respective sports’ halls of fame, but in the hearts of 20th Century Baltimoreans, forever.

And so on October 22nd the Brooks Robinson statue will be unveiled, depicting the greatest third baseman in the history of the game, as he peers southward towards Camden Yards, built in part on the tradition of excellence he helped to foster.

For information on how you can get involved with the Brooks Robinson statue project, go to brooksrobinsonstatue.org.

See you out there.