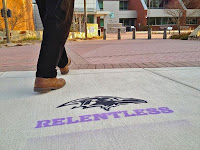 We’ve painted the town purple.  We have Ravens caravans traveling the city.  The Marching Ravens Pep Band is playing the fight song.  Everyone is wearing purple.  The parties are planned.  We are ready for this weekend’s AFC Championship game.

Baltimore is definitely a football town.  We love our Ravens and support our team like no other city.  Is Boston flooded in blue light?  Is New York?  No.  We are loyal fans.  True, the Patriots’ fans are incredibly loyal.  So are the Giants’ fans.  But they don’t paint the town like we do.  Why?

I think that in cities like New York, Boston, San Francisco, even Pittsburgh, few people remember what it was like before football.  Their teams have always been there.  The first kick-off off the season is just assumed.  No one from these towns has experienced the emptiness of an autumn without the NFL.

Marylanders know what it means to lose a team.  We know what it feels like to see a pro-football season open with no one to cheer for.  We know the empty feeling of being left out of the National Football League.


Shawn Herne is the Chief Curator for the Babe Ruth Birthplace Foundation, Inc.