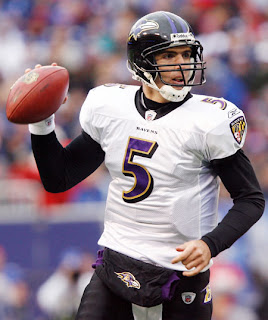 I took a friend of mine to the Ravens’ Christmas Eve game against the Browns.  It was the first time in thirty years that he had attended a professional football game.  He was very impressed with the Ravens’ pre-game festivities and the level of passion shown by the Baltimore fans.  He was surprised, however, by the lukewarm reception given our quarterback during the player introductions.  He was right.  The crowd’s enthusiasm for Joe Flacco was just mediocre.  There was definitely a roar for other players.  Why not for Joe?

Ray Lewis, Ed Reed and Terrell Suggs are institutions in this town.  For years they have been the face of the Baltimore Ravens and they have earned every second of respect and recognition they receive.  But even Ray Rice and Torrey Smith receive warmer welcomes than old Joe.  Has he not delivered?  Has he not surpassed all the previous Ravens’ QB records?  Hasn’t he led the Ravens to the playoffs every year since his debut?

So what’s the problem?  Joe, in many ways, is the Pete Sampras of football.  He regularly gets the job done but otherwise is happy to keep his profile under the radar.  He doesn’t have a flashy intro dance like Ray Lewis.  He doesn’t have a trademark wrestler move like Aaron Rodgers.  He doesn’t scream and yell at the officials.  He doesn’t lash out at the media.  He doesn’t hang out with runway models or party with the Hollywood crowd.  He just quietly goes about his business.  He’s kind of boring.

Perhaps that’s the problem.  Joe is the victim of his own creation.  He doesn’t have a swagger.  He doesn’t talk trash.  He really doesn’t promote himself.  Facial hair aside, he’s just a regular guy.  Unitas didn’t talk trash, but he certainly walked with a swagger.  His cool demeanor came across as confidence.  He didn’t lead like a quarterback, he led like a general.

Baltimore likes drama…a little theatrics both on and off the field grab headlines.  We like fire and passion.  We like a little trash talk that is backed up on the field.  It is why we love Ray Lewis and Terrell Suggs.  They are fiery and passionate.  Joe’s a little too sedate…more like a librarian than a professional athlete.