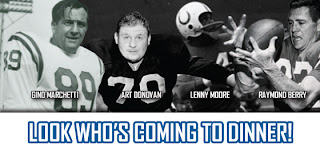 This December 6 our museum hosts its annual gala at Martin’s West in Baltimore. And as we pause from the busy pulse of the workplace to spend Thanksgiving with our families and friends, I want to shoot out a special offering of thanks to the seven Baltimore Colts we will pay tribute to at the gala.

Weeb Ewbank, Jim Parker, John Mackey, Raymond Berry, Lenny Moore, Gino Marchetti and Art Donovan are being inducted into our Hall of Legends that evening, because of what they meant to the Colts and to the NFL, but, more importantly, what they mean to Baltimore.

These seven men came along at a time when Baltimore was fighting to reinvent itself. Following the heady manufacturing days of WWII, the city had gone into rapid decline in terms of industry and image. By the late fifties we were best known as the rest-stop between Washington and Philadelphia.

But then along came the Baltimore Colts, who, under head coach Weeb Ewbank, rapidly rose from a shaky expansion franchise foundation in 1953 to kings of the pro football world in 1958. In their first-ever title game, against the Giants at Yankee Stadium in New York, the Colts triumphed in dramatic, sudden-death fashion, in what became known as the “Greatest Game Ever Played.”

That game, featuring two heart-stopping drives, one in regulation, one in over time, and orchestrated by Johnny Unitas, father of the two-minute drill, put the NFL, and Baltimore, on the map.

Off the field, these seven represented the changing face of a city in transition. Moore, Parker and Mackey, black athletes who overcame the shackles of racism by soaring to superstardom on the gridiron, eased Baltimore’s path to integration. Artie, following his “gladiator” days with the Colts, became “Fatso,” late night TV star and popular radio personality. Gino gave us “The Giant” hamburger, and Raymond made us proud by moving into the head-coaching ranks and taking New England to a Super Bowl.

And then there was Weeb. After leaving the Colts following the 1962 season, he coached the New York Jets to victory in the NFL’s other most important game, a 16-7 vanquishing of our Colts in Super Bowl III. That victory put the AFL on par with the NFL, and set pro football on a path to success it still enjoys today.

So, thanks to our Baltimore Colts honorees. I hope to see you at our very special tribute on December 6. Happy Thanksgiving.