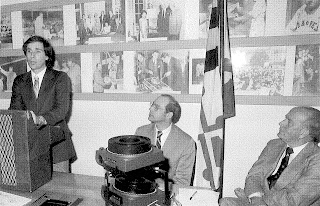 In 1981 I was working on a documentary on the life and times of George Herman Ruth for the Babe Ruth Birthplace Foundation. When the production premiered in early 1982 at the Babe Ruth ‘House,’ I met for the first time William Donald Schaefer, Mayor of Baltimore. The event was small in terms of attendees and media attention, and I wondered why the Mayor would take time from his busy schedule to be there.

I came to learn the answer to my query over the course of the next twenty-five years, as I watched him show up for any event, big, small or unscheduled, if it might push forward or benefit some component of his domain, be it city, state, county or neighborhood. William Donald Schaefer devoted, indeed donated his full life’s energy and passion to working for the community, to Baltimore, and to Maryland.

He was not really a sports fan, but that didn’t stop him from fighting tirelessly to protect and promote our Orioles and Colts, or from developing Camden Yards, or from luring the NFL to Charm city, or from proclaiming the Babe Ruth Museum the Official Archives and Museum of the Baltimore Colts, or from advocating and providing state support for the development and creation of Sports Legends Museum at Camden Yards.

He did all those things, not as a diehard fan, but as a passionate supporter of any and every thing he deemed good for our city, our state and our citizens. There will never be another like him in my lifetime, and perhaps ever.

Thank you, Mr. Schaefer, for being there for all of us.