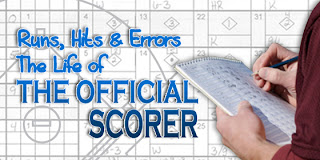 I’ve been playing and coaching baseball and softball for more than fifty years now, and one of the absolute joys of the game is keeping score and compiling statistics. The different eras of baseball, after all, can be contrasted and compared better than any other sport, because of statistics.

In my basement you’ll find box after box crammed with scorebooks, and while they primarily serve as historic snapshots of by-gone games played by by-gone players, those books also vividly demonstrate that the standard guidelines for keeping score are more often than not replaced by abstract offerings from the mostly ignorant masses searching for ways to interpret and record what just happened on the field.

In amateur ball, the person responsible for scorekeeping may vary from inning to inning, game to game. And each scorekeeper, guaranteed, brings his or her special nuance to the page. To record an infield putout, for example, some game trackers use the conventional system wherein numbers are assigned to each defensive position. A 6-3 putout means the shortstop (6) fields a grounder and throws to first (3) for the out. But I’ve seen that same play recorded by letters: GO (groundout), S-1st.

And while there are as many ways to keep score as there are scorekeepers, there’s something else going on that’s worth mentioning here. Scorekeeping seems to be going the way of the dinosaur. If I ask some of the young guys on our softball team to keep score, they look at me like I’ve got a hole in my head! They don’t know how. Go to an Orioles game and look around. Virtually no one keeps score any more. In the fifties, sixties and seventies, you went to the ball game, bought your game program with the scorecard, and kept score. I remember asking my father how to record tricky plays, over and over and over.

All of which leads me to announce that on Saturday, June 25, at 4pm at Sports Legends, we are going to have a program on how to keep score. Every MLB game is recorded by an official scorer provided by the home team. It is his job to keep score, rule on whether a play is a hit or error, and interpret the game according to official scorekeeping standards. Jim Hennemann is the Orioles official scorekeeper. Bill Stetka used to be. Both will be at Legends to discuss and demonstrate how to keep score…the right way.

But -guaranteed- they will tell you that even in their official capacity they still find ways to deviate from the norm, which makes every page of every scorebook a unique interpretation of another chapter of the greatest game ever invented, our national pastime.

Come on down to Legends; you’ll be glad you did.