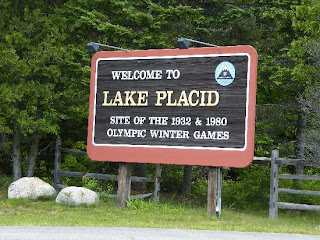 It always surprises me to see how one city capitalizes on its sports heritage and another does not.  Take the case of Montreal, Quebec and Lake Placid, New York.  Located only 100 miles apart the two cities share a common history but could not be more different from each other.  Montreal, a city of 1.6 million inhabitants, hosted the 1976 Summer Olympics.  Lake Placid, a town of approximately 2,500 residents, hosted the 1980 Winter Games only four years later.

References to the 1980 XIII Olympic Winter Games are everywhere in Lake Placid.  A visitor to the tiny upstate New York town sees Olympic banners adorning the Main Street, stores with Olympic apparel, and hotels, restaurants, and attractions celebrating the events of February 1980.  In Lake Placid the Olympic spirit is everywhere and permeates everything.  For more than 30 years Lake Placid has capitalized on the events of twelve winter days in 1980.

The atmosphere could not be more different in Montreal, host of the Games of the XXI Olympiad.  The Olympic venues are mostly still there.  Olympic Stadium, location of the opening and closing ceremonies is a city landmark, but has been unused since the Expos moved to Washington.  The Olympic Rowing Basin is still there, but serves more as a novelty during the Formula One Grand Prix. Even the Olympic Village, residence for the athletes during the ‘76 games, is still there although now serving as rental apartments.  But references to the Summer Games are no where to be found.  There are no banners, no museums, no stores and no attractions.  For Montreal, it is as if the games never happened.

And that may be the way Montreal wants it.  The Olympic Games were a disaster for North America’s French city.  Current estimates for the construction and maintenance of Olympic Stadium alone top $1.61 billion (Canadian).  All for a structure that hosts no major sports team.  In fact, it wasn’t until December of 2006, thirty years after the Olympic flame was extinguished, that Montreal finally paid off its debt for the 1976 games.  Montreal’s Olympic experience was a nightmare.

Lake Placid also ran a deficit for hosting the Olympics.  But the $4.3 million deficit has been earned back many times over in tourist dollars.  For the restaurants, stores, and hotels it is the only business in town.  The difference is obvious.  Lake Placid embraces its sport heritage…Montreal is running from it.  One city is proud…the other just wants the memory to go away.