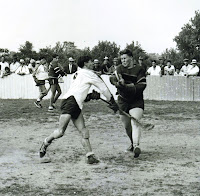 As the MIAA High School lacrosse playoffs are about to begin and Baltimore is once again hosting the NCAA Lacrosse Championships at M&T Bank Stadium I thought it appropriate to dig up an old piece I wrote about the origins of the game.

When I first moved to Maryland in 1996 I was surprised to discover the popularity of lacrosse in the OldLineState. I was even more shocked to learn that lacrosse was the state’s official team sport. For me, lacrosse was an Indian game. Growing up on an Indian reservation along the St. Lawrence River in northern New York and southern Quebec, lacrosse was everywhere. It was the game given to us by the Creator and played by my ancestors. It was played by friends and relatives on teams called the Akwesasne Thunder and the Warriors. It was our game and I’d never seen it played by anyone who didn’t look like me.

The exact origins of North America’s oldest game are not known. Each Indian tribe has a different story told in the oral tradition about how the game came into being. My people, the Mohawks of the Iroquois Confederacy, believed that lacrosse was given to us by the Creator through the prophet Handsome Lake. We called it Tewaarathon. It was believed the game was played for the Creator’s enjoyment. It was a means of giving thanks and showing respect.
The traditional game we played varied significantly from what lacrosse fans see today.  Field and team sizes were negotiated prior to competition by tribal elders. The rules required that both teams were equal in number.  One or two hundred playing players were not unusual. Field dimensions were also negotiated in advance. Some games involved players running for miles.  No player could touch the ball. Competition continued until three goals were scored by a single team.  Games could last for days.
The men playing the game were the tribe’s best. Players trained for weeks in preparation of a single game, building strength, controlling their diet, and imposing strict discipline to mind and body.  In the heat of battle, competition was fierce and bloody, bones were broken, lives were occasionally lost. All believed that the Creator was watching. No one wanted to be weak.  No one wanted to be disrespectful. The game was spiritual as much as it was athletic.
This was the game the French missionaries witnessed when they first made contact with the Iroquois and Algonquin tribes in present day Canada. The earliest report came from Jean De Brebeuf, a Jesuit missionary who lived among the Hurons in the region around Montreal. Other missionaries expressed outrage over the spiritual significance of the game and frustration for their failure to stop it.
But, despite the church’s opposition to the game, other non-Native people took notice. In 1834 a lacrosse exhibition was staged at Ville St. Pierre near Montreal by two seven-man teams made up of Mohawks from the Akwesasne and Kahnawáke communities. The spectators enjoyed the game. For the next several years teams of non-native players challenged Mohawk teams in competition.
Then, in 1856, the evolution of lacrosse into its modern form began with the creation of the Montreal Lacrosse Club. This organization, along with others that soon followed, helped define the modern game with field dimensions, rules of play and equipment design. This game, unlike the Indian version, was based on passing and had no spiritual significance.  And, like baseball to the south, it was a club sport. By 1867, the year Canada was born, as many as eighty lacrosse clubs existed.
Exhibition games in the United States, Great Britain and Australia led to the formation of lacrosse clubs around the world. In 1877, ManhattanCollege and New YorkUniversity staged the first intercollegiate game, which spurred other schools to add the sport to their athletic programs. The following year, it is believed, a track team from Baltimore witnessed a Fourth of July competition in Boston and brought it back to the Maryland.
But the spirit of goodwill generated by these exhibitions did not last. The first lacrosse rules book from 1867 stated “No Indian must play in a match for a white club, unless previously agreed upon.” In 1880, the National Lacrosse Association of Canada called for games to be played by amateurs and banned competition with anyone it considered “professional”. Since Indians charged spectators to cover their travel expenses, the latter were excluded from competition. One hundred years would pass before an Indian team participated in international competition. Racial segregation prevented most Indians from playing the game they introduced until 1990 when the Iroquois National Team played in the Lacrosse World Cup held in Australia. The team lost but at least they were able to compete.
By the mid-twentieth century Indian lacrosse was evolving, too. Indian teams moved from the open outdoor fields to the indoor hockey arenas throughout Canada. It was the beginning of box lacrosse. Equipment was also changing. The lacrosse stick factories at Akwesasne (New York) produced the sticks used throughout the sport. Thomas Vennum, Jr, author of American Indian Lacrosse: Little Brother of War, estimates that, at its height of production, Akwesasne produced 97% of the world’s wooden lacrosse sticks.
Indian lacrosse began as the Creator’s game. But as Christianity spread and the role of traditional beliefs diminished, lacrosse’s spiritual significance deteriorated. Today, with increased college enrollments, American Indian lacrosse players have begun to make their way on to college lacrosse teams. It is a different game from the one played by our ancestors. The rules have changed, the equipment has changed and the significance has changed, but at least it is still our game.
Shawn Herne is the Chief Curator for the Babe Ruth Birthplace Foundation, Inc.