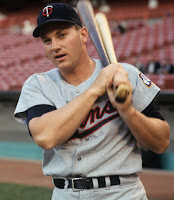 Hall of Fame baseball great Harmon Killebrew passed away this week. His quiet, off-field demeanor was in direct contradiction to a menacing, aggressive plate presence that earned him the nickname “Killer.” Killebrew spent 22 seasons in the American League, all but the final year slugging and slashing away at the opposition under the auspices of the Washington Senators and Minnesota Twins. And during that time he did more than a little damage to my home town Baltimore Orioles.

In a 1991 interview, the “Killer” noted how much he loved to play at Baltimore’s Memorial Stadium. He said it was one of his favorite parks to hit in, despite “those darned white houses behind center field, which made seeing the ball difficult for day games, and some of the worst lighting in the league at night.” But hit he did against the orange and black, including the longest home run in the history of Memorial Stadium, a 471 foot blast over the hedge in left center off righty Milt Pappas on May 24, 1964!

But despite his prowess as one of the game’s all-time sluggers (573 homers), and a locker full of VIP credentials and awards, Harmon Killebrew will most likely be better remembered by those who knew him as a regular kind of guy, and as a real gentleman. He came to the Babe Ruth Birthplace twice, once in the early eighties and again to help commemorate the 100th birthday of Ruth in 1995. On both occasions he seemed more intent on doing what he could to make our jobs as hosts easier than to be acknowledged for his superstar status.
One of the last times I saw “Killer” was at a Babe Ruth symposium at HofstraUniversity in the spring of 1995. The University had pulled out all the stops to put on a first rate event, and that included inviting in a full roster of Hall-of-Famers, including Killebrew, to talk about Ruth’s impact on the game.
The museum was represented by several staff and board members, and one morning, as we prepared to drive from the hotel to the symposium, Harmon knocked on the driver’s window and said, “Mind if I grab a ride?” Over the next few minutes we talked a little weather, a little politics, and maybe a little Babe Ruth. Just normal, everyday conversation, but with Harmon “Killer” Killebrew, Hall of Fame class of 1984…and one of the true gentlemen of the game.
See you out there,
Mike Gibbons
Mike Gibbons is the executive director for the Babe Ruth Birthplace Foundation, Inc.