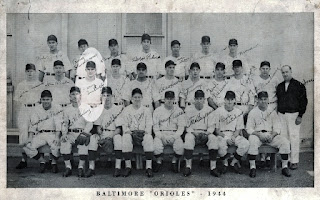 One afternoon several years ago I received a telephone call from a woman who wanted to talk baseball with me.  I could tell from her voice that she was elderly, in her late seventies or early eighties.  She asked me if the museum had anything on exhibit from the International League Orioles.  I indicated we did.  “The 1944 team?” she asked.  “Yes” I replied.  She wondered if I knew about Harry Imhoff and did I know his connection to the 1944 Baltimore Orioles?   I did not.

Baltimore-born Harry Imhoff isn’t the first name to come to mind when talking about the ’44 Orioles.  The pennant-winning team was led by notable veteran and fan favorite Tommy Thomas. Other standouts included Howie “the Howitzer” Moss, who led the International League with 27 homers in 1944, catcher Sherm Lollar, left-fielder Stan Benjamin, third baseman Frank Skaff and pitcher Charles “Red” Embrees. Imhoff, newly signed by the Orioles in the spring of 1944, was to be an important part of the team’s future.  The Washington Post wrote, “Harry Imhoff, just out of high school, is another promising receiver with a whale of an arm.”

But Harry appeared in only one game for the ’44 Birds, and went 0-2 at the plate.  And although his story sounds like that of “Moonlight” Graham, the real-life baseball player popularized in the movie Field of Dreams , Imhoff chose to suspend his playing career in order to serve his country.  Harry, like so many young people of his generation, put his future on hold and joined the Marine Corps.  But, Harry’s baseball dreams would never come to be. In April of 1945 he was killed exiting a landing craft during the Okinawa Campaign.  He was just 18 years old.

She wanted me to know because she was Harry’s childhood sweetheart.

Over 340 major leaguers served in the Armed Forces during World War II and as many as 3,000 minor leaguers joined or were drafted.  Nearly 20 former Orioles served, including Harry and Earl.  This weekend people will watch parades, enjoy cookouts, and probably take in a game of baseball.  I’ll do the same.  But I’m going to make time to salute our veterans, especially Harry and Earl.